How to install and use Clans [Java]

In this article, you'll learn how to setup and install the Clans plugin. This plugin is useful for having teams or clans within your Minecraft Server. Let's get to it, there are very few steps to installing this plugin!

Now, we will download and install the plugin. Head to this link and download the plugin. Then, upload it to WitherPanel by dragging and dropping the file into the plugins folder. To top it of, restart your server to apply the changes.

Make sure to save all changes to the config file before exiting it!There are many options in the config, but we will be going over the most significant ones.ClanNameLength - Indicates how long a clan name should be. If you set it as 5, it will only allow clan names to have 5 charactersBlacklistedClanNames - Indicates what clans are not allowed to use as a name. This option should be used with the following format: 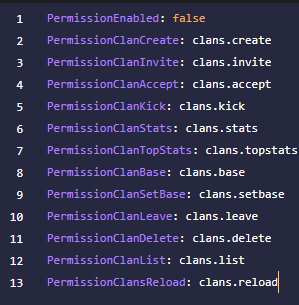 ClanLimit - Indicates what the limit for clans should be. For example, if you set this value to 10, you will only have 10 clans.You can further configurate the plugin in the config.yml file that comes in the Clans directory in the plugins folder.